6. The Wabbit and the Ghost Inspectre 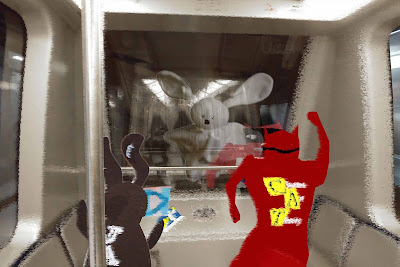 The Wabbit peered into the adjacent carriage. Suddenly Ghost Bunny filled the window. "Woooooh, tickets please!" The Wabbit shrugged and produced his metro pass. "Wabbit," said Ghost Bunny, "This is the Ghost Train. You require a ghostly ticket." She rapped on the window. "You too, Skratch." Skratch didn't have any ticket at all, but that hardly seemed to matter. "I'm not a ghost," sighed the Wabbit. "Then you can't have a ticket," replied Ghost Bunny. "No special offer?" inquired Skratch. Ghost Bunny haunted up and down for a while, then wailed. "Special offers are only available through the Ghost Institute in Via Nizza. And we've sold out." The Wabbit peered behind Ghost Bunny and couldn't make out much. Only fleeting wraith-like figures with hardly any substance. "I can only see shadows," he said. "Oh them," howled Ghost Bunny. "They are spectral commuters, awkward and empty as the worst of your jokes." Skratch smiled to himself. He knew that Ghost Bunny had a thing about the Wabbit and he was therefore being mercilessly teased. "Where does the Ghost Train go?" he ventured. "Nowhere," explained Ghost Bunny. "We don't do destinations." "So what might it say on a ticket?" asked the Wabbit. "Round Trip to Nowhere" shrieked Ghost Bunny. "And how much does it cost?" asked Skratch. "Nothing," laughed Ghost Bunny.
at September 28, 2017