5. The Wabbit and the Last Metro 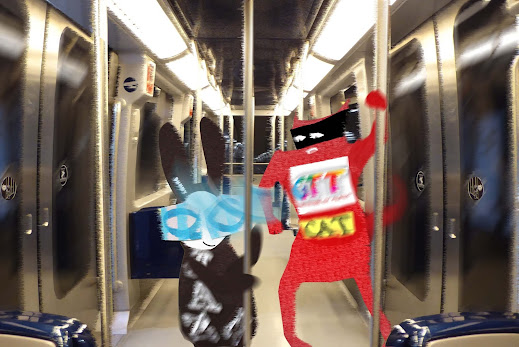 The doors whooshed shut. Skratch and the Wabbit grabbed rails as the train took off with a siren wail and shot down the tunnel at enormous speed. The Wabbit's 28 teeth clattered. Skratch's tail spiked out like a porcupine. "Maybe the driver's late for supper?" suggested Skratch - although he very well knew the whole system was automatic. The Wabbit hardly needed to shake his head; it was shaking like a shirt in a hurricane. He smiled nonetheless. The loudspeaker system crackled into life with a spectral voice. "This is the last Metro to the end of the line. Passengers not travelling to the end of the line, should get off the train now." The Wabbit wanted to laugh but his stomach revolved like a spin drier. The speakers crackled again. "We wish to apologise for the speed of the train. This is due to a motor malfunction and braking failure." The train gathered more speed. The noise became unbearable. Stations flashed by in an instant. The Wabbit drew close to Skratch and shouted in his ear. "Do you believe any of this?" Skratch counted his nine lives usage and came to twelve. His shrug looked like hip hop and his grip on the passenger rail was a Lindsay Kemp mime. "You know any good prayers?" he asked. The Wabbit tried to oblige. His teeth chattered wildly. "Bless this journey that we undertake. Do thou guard and protect us." Skratch sighed. "Wabbit, there is no guard." Suddenly the train slowed and a ghostly voice issued from the speakers. "Wabbit, you're not supposed to be on the Ghost Train ..."
at September 25, 2017