5. The Wabbit and the Dodgy Truck 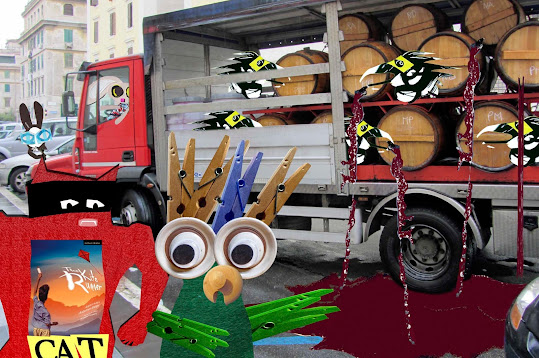 They followed the Skuttles until they found what they wanted. They were up to no good of course. Raiding wine trucks was part of their job description. The Wabbit sent in Skratch the Cat and Peggy as decoys - and they strolled happily along the street chatting about movies. "Oh look there," said Peggy in mock surprise. "These creatures might have something to flog." "I'd say they might," meaowed Skratch.  "Anything to flog?" yelled Peggy at the top of her voice. There was no reply from the Skuttles who continued to inspect the cargo. The Wabbit lined up his automatic and carefully shot several holes in the barrels. Wine gushed everywhere and the Skuttles fell on it with gusto. "Spo-de-ode. Spo-de-ode," they yelled and they gulped as they sang. Lapinette leapt into the driver's cabin and started the truck. It lurched as she crashed it into gear and more wine poured out. Now the Skuttles were frantic. "More wine," they cried, "Spo-de-ode. Spo-de-ode. More wine." A Skuttle turned to Peggy. "Do you have any wine?" Peggy had never ever been asked for anything before. "Yes." she chirped. "Someone flogged me a massive Barolo consignment back in '79." "Ooh," said Skratch, "You can't get better." Peggy spread her wings. "It's reserved to me in a cantina. Jump in the truck we'll take you all there." The Skuttles clambered drunkenly aboard. The Wabbit, Skratch and Peggy jumped into the cabin just as Lapinette swerved from the sidewalk. The Wabbit started to sing. "Down in Piemonte where everything's fine, all of these Skuttles will be guzzlin' that wine." "Pass me a drink," said Lapinette.
at September 05, 2017