1. The Wabbit and Jenny's Return 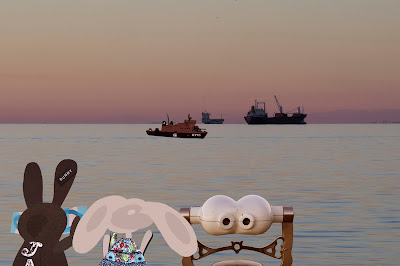 "Here she comes now!" Lapinette sounded excited. The sun dropped fast below the horizon - but had time to give a lick of pink paint to the bridge of the Lepus. Jenny's nautical voice crackled over Lapinette's radio. "Yo MacHo, rabbits, this is the Lepus, copy?" From further down the seafront, the Wabbit heard a faint cheer and he chortled. "Jenny has her admirers." Lapinette's tone was crystal. "Copy m/v Lepus, permission to berth." The Lepus slowed engines and swung to starboard. Lapinette noticed the Wabbit's critical eye as he stared at the manoeuvre. "Jenny can park the Lepus in a fish tank," she murmured. "A ship does not park, it docks," scowled the Wabbit. Lapinette grinned and lifted her radio. "Commander Wabbit salutes the ensign. He says you can park over there." The radio hissed and popped with Jenny's pirate laughter. "We be internationally awash with parking tickets." A foghorn blast sent seagulls spiralling as the Lepus berthed with barely a splash. The Wabbit turned to Lapinette. "Have you any idea what all this is about?" Lapinette's ears swayed. "There's nothing hush hush." "How would you know?" asked the Wabbit "I have hush hush clearance," said Lapinette. The radio crackled. "Grog in my quarters in half an hour, copy?" The Wabbit took the radio. "Loud and clear! Out."
at January 23, 2017