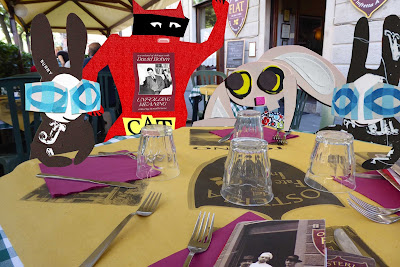 The Wabbit and his team waited for service at the Fiat Caffè. But it was slow. "Where are our opposites?" asked Lapinette. "They'll be along in a minute," said the Wabbit. "What are they doing?" said Wabsworth. "Shopping at Lingotto," said Skratch. "Great," said Lapinette. "We can move to another caffè." Wabsworth wrinkled his nose. "Do we have time?" Lapinette laughed and got up. "Where aperitivi are concerned there's always time." Both the Wabbit and Wabsworth rose with her. "Is no-one going to ask the question?" pleaded Skratch in a disappointed tone. "I will," said the Wabbit. "What kind of adventure did we just have?" Skratch began to head in the direction of Eataly, his favourite place for lunch. "It was time travel. Reshuffled time provided new spatialities, achieved by moving the present." Lapinette nodded wisely. "It was Quantum's lattice drive that moved our present." The Wabbit sniffed. He could only think of a salad sandwich and in his mind he watched one making itself. His tummy rumbled. "Temporal relocation makes me hungry." "I think we were in hypertime," continued Lapinette. "We were a four dimensional hypersurface in five dimensional space." Now the Wabbit's rumbling was deafening. So when Wabsworth muttered about space-time, velocity and action, the Wabbit slapped him on the back. "I need an objective sandwich. This instant."
at January 20, 2017