8. The Wabbit and the Second Unit 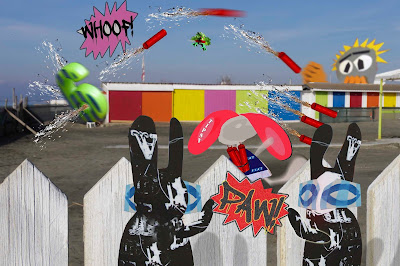 The Wabbit's second unit didn't hesitate and the Six never saw it coming until it was too late. Tipsy vaulted the fence and kicked a series of explosives into the air. "Go Panico!" she yelled. Panico trembled in his boots but he was much more scared of Tipsy than any number. He fisted the projectiles and one by one they arced across the beach huts. A series of detonations shook the ground. The Six began to topple. "Take that for your trouble," shouted Panico. For a moment the Six hauled himself up. "I'll get you for this!" he screamed, "You can't do without Six." Wabsworth and Wabsword touched paws in a high five. The flash could be seen for kilometres. Sheltering behind the huts, the two Wabbits heard the beat of dragon's wings and they looked up as Terni swooped along the beach. An explosive dropped like a depth charge. Another flash lit the beach. The Six keeled over and his moans floated across the sand. "Is this the end of Six?" Wabsworth shook his head just like the Wabbit and then he smiled. "You could have been a contender, Sixter." Wabsword grinned and called out to Tipsy. "Take him in, book him and lock him up." "On what charge?" whimpered the Six. "Unnatural acts," shouted Tipsy.
at January 11, 2017