2. The Wabbit and the Ghost Flag 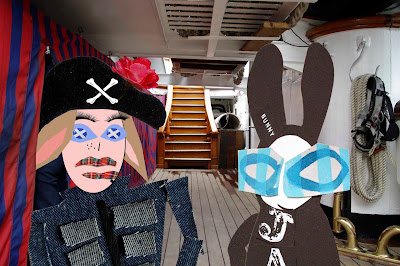 Captain Jenny paused outside her quarters and took the Wabbit aside. "You got my message?" The Wabbit nodded. They stood silently for a long time. The Wabbit broke the silence. "How was the refit?" Jenny nodded too. "We have the extra space you asked for." The Wabbit took his paw out of his fur and pointed. "Have the cargo deck ready for the consignment arriving 0.00 Zulu Time." "I tripled the sentries." said Jenny. The Wabbit's feet thumped lightly. "I wasn't expecting to return to Wablantis. Things aren't readily ready." Jenny smiled grimly. "No-one readier than you." The Wabbit shook his head. "I'm reluctantly ready." Jenny touched the Wabbit's paw. "Wablantis needs help." The Wabbit's squinted smile was a question. "Sea Frackers?" Jenny sighed. "They landed using cloaking technology." "Tricky Frackers," groaned the Wabbit. "Then they started fracking around the coast," continued Jenny. The Wabbit's smile failed miserably. "Maybe there's a chance they'll frack themselves up." At that thought, the Wabbit suddenly brightened. "I developed my wearable technology. It will make the Lepus disappear." Jenny laughed a long pirate laugh. "Except for the Jolly Roger," continued the Wabbit. "I couldn't do the flag." "Ahaar, a ghost flag," drawled Jenny. "I like the way they flutters."
at January 25, 2017