11. Lapinette and the Five Kabooms 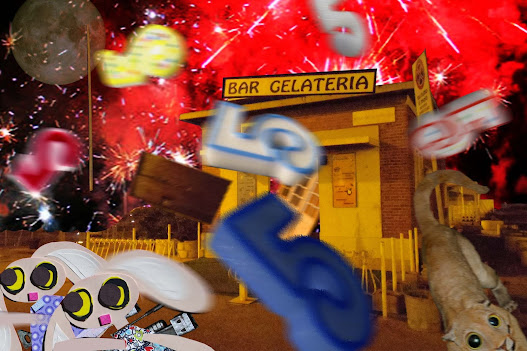 The Lapinettes and Puma took off when they heard the explosion. Puma was first as the blast took the bar door from its hinges. The sound died away. Then there was a pause. Debris settled on the paving. "That's not the Wabbit's usual," muttered Lapinette. She grabbed her opposite by the shoulder and hauled her from the dock. But there was more than one explosion. A series of detonations made their way along the quays and painted the waterfront red. As if delayed, the Fives came swiftly hurtling from the crimson glow. They crumpled as they landed and lay inert. Lapinette stepped over the blue one and prodded it roughly with her snazer. "We know you're hired the Agents of Rabit," she hissed. She prodded it again but there was no response. The other Lapinette prodded him too. "Talk!" There wasn't even a groan. Lapinette shrugged. "His number's up." "Well, I don't trust them," said the other Lapinette, "they could be doing a number on us." Their ears quivered as five more explosions rent the night air. "Fireworks?" speculated Lapinette's opposite. Lapinette shook her head. "The Wabbits are cleaning up." "How tidy of them," said her opposite. Puma appeared to sniff round the debris. "Let's get out of here before the Mayor arrives." "Puma, what's the Mayor going to do?" laughed  Lapinette, "marry us?"
at January 18, 2017