11. The Wabbit and the Lattice Drive 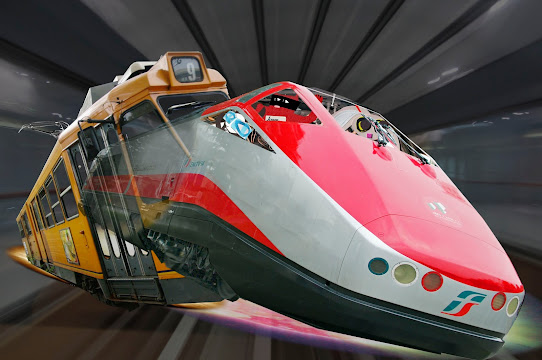 They crowded into Quantum's cab and gazed into the distance. The something started as an orange dot but it grew rapidly like an ant on steroids. Lapinette hunched over the controls. "It's Nine the Tram and he's motoring!" Skratch shielded his eyes. "He's catching up. He's on collision course and he'll be here soon." "Got a time?" asked the Wabbit. "Now," answered Lapinette. Nine the Tram loomed impossibly large. He was so close the Wabbit could spot worn upholstery on the seats. Skratch vaguely read a window advert for computer training and he braced for impact. Everyone did. The Wabbit screwed up his eyes and mumbled a prayer. But there was no collision - nothing but a brief moment of being part of a tram. For Skratch it felt orange and tasted of metal. Lapinette could smell rubber and oil and vegetables from the market. The Wabbit rubbed sand from his eyes and let out a belch of compressed air. Then Nine was gone. All that remained was a faint clang of a bell and the grinding of metal on metal. The Wabbit sat down. "My insides feel funny." "Mine too," purred Skratch. Lapinette looked at the Wabbit. "Have you been modifying things again?" The Wabbit shuffled his paws and shrugged. "It's early days for the Lattice Drive." Lapinette stamped heavily on Quantum's footplate. "Did you try it out anywhere first?" "I tried it on Nine the Tram," sighed the Wabbit.
at August 02, 2016