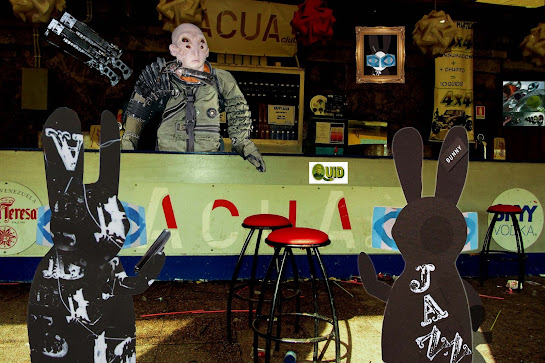 Planet OGLE-2005-BLG-390Lb was cold as ice but inside it was warm and fuggy. The Alien Pilot was fishing behind the bar for his emergency Winchester, when he heard a soft Scottish voice. "Two pints of lager and a packet of pistachios." He tried to suppress a grin and stood up. "Commander!" With a nod of his head, the Wabbit gestured to Wabsworth who continued to torture an automatic. The Alien Pilot swung round and spoke sternly. "Check weapons at the bar!" Wabsworth dropped his automatic on the counter top with a clatter. Glasses rattled. "Commander," said the Alien Pilot, "I don't know who you're looking for. Anyway I never saw a thing, I was asleep." The Wabbit smiled. "Maybe you saw something in your dreams?" The Alien Pilot considered long and hard. "Maybe I dreamed of a phantom who hooked up with a floozy and boarded the Sombrero shuttle." Wabsworth growled. "Maybe that's our man." "The next shuttle is a one month wait," frowned the Alien Pilot but the Wabbit winked. "We got our own shuttle, we don't need a timetable." The Alien Pilot proffered a hand and grasped the Wabbit's paw. "Best of luck. Finding that phantom is a one in a million chance." "A million's a lot of odds," said the Wabbit.  The Alien Pilot pumped his paw. "You're one in a million. I'm betting on you."
at August 15, 2016