1. The Wabbit and the Watchtower 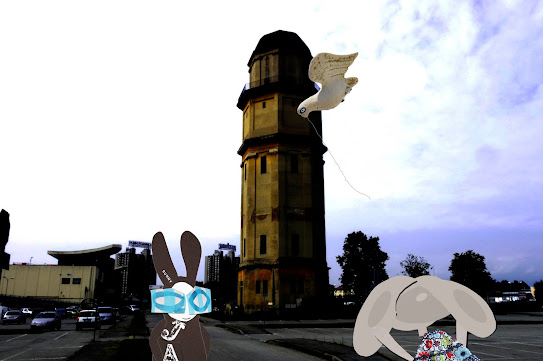 Lapinette watched the Wabbit for quite a while, but the Wabbit was contemplating the watchtower and didn't notice. He looked the tower up and down and, finding it lopsided, he wondered whether it was him that was askew. So for a moment he anchored his feet on the ground and imagined a slim thread connecting his ears to the heavens. The thread seemed to pull him directly upright until he felt as connected and centred as a Wabbit could be. "Aaaah," murmured the Wabbit. A sudden skyward tug thrilled the Wabbit. "Wow. I had a satori moment!" But his thought was short lived. "Hello Wabbit!" It was a haunting coo from Parakalo the Dove holding a thread that coiled around the watchtower and snaked down its elderly walls. "Shichiten hakki," smiled the Wabbit. "Bonbu mo satoréba hotoké nari," replied Parakalo. The Wabbit nodded. "Quite right," he muttered. "All things are merely dreams." "Wabbit!" yelled Lapinette. The Wabbit jumped in the air. He landed in an ungainly fashion and tried to cover it up. "Ah, here you are Lovely Lapinette, a dream on legs." "These legs were made for hopping," grinned Lapinette and she tap danced across the street to embrace the Wabbit. The Wabbit lurched forward and hugged Lapinette. "That tower leans to one side." Lapinette laughed. "No, it's you. You should come with a spirit level."
[Shichiten hakki. Shichi ten hakki: Japanese. Fall down seven times. Stand up eight.
Bonbu mo satoréba hotoké nari: Japanese. All things are merely dreams.]