13. The Wabbit and the Nuts Question 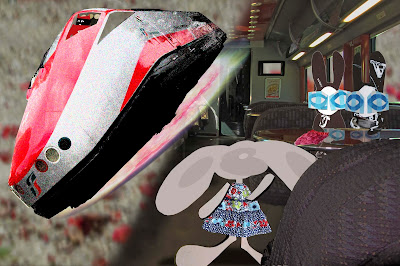 Lapinette felt sorry for Wabsworth because he was always so strong. But now he looked washed out. His paws trembled and his nose twitched. Hosting an alien traveller had proved wearing. Quantum rushed through space to co-ordinates specified by the Wabbit. "Head for Planet OGLE-2005-BLG-390Lb," he'd snapped. Lapinette shook her head. "I don't think the traveller is the Alien Pilot." No," replied the Wabbit, "but he drinks in every hostelry in the quadrant. He'll know where to find our fellow." Lapinette sighed. "Then what?" "I require a quiet word with him," said Wabsworth. Lapinette fumbled in her fur and tossed him an automatic. "Take Mr Makarov with you. He's most diplomatic." Quantum flashed through a region they'd never seen before where stars were blossom and planets, gravel. "Fasten your seat belts, ladies and gentlemen," said Skratch over the speakers as Quantum shuddered violently. "We don't have any." smiled the Wabbit. Skratch laughed. "Then would anyone like a drink from the bar?" Lapinette's paw shot in the air. "A triple distilled carrot aperitivo" The speakers crackled. "Coming right up," said Skratch. "with pistachio nut sprinkles," added Lapinette. "We're right out of pistachios," yelled Skratch. "Nuts, nuts, nuts," mused the Wabbit. "Now I did hear of a bar called 'Insanire Furiosi'." Wabsworth played with the slide on his automatic. "Lunatic Madmen," he muttered.
at August 13, 2016