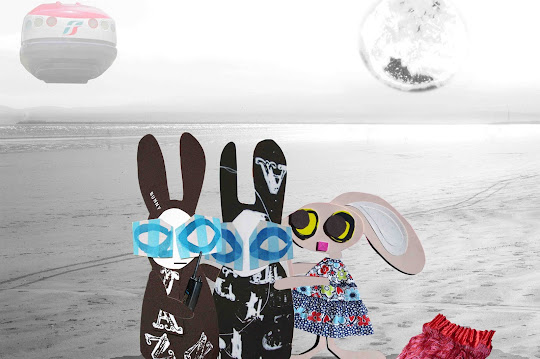 Quantum the Train received an emergency transmission that sent them scurrying to a damp, misty planet no-one had ever heard of. The signal came from an agent's location beacon and soon the Wabbit and Lapinette were looking at a lifeless Wabsworth on a featureless beach. "Wabsworth!" yelled Lapinette, "He can't hear you," said the Wabbit, "I think he's switched off." He groped under Wabsworth's fur. Lapinette groped too. "What are we looking for?" "A reboot button," said the Wabbit. Lapinette was amazed. "I didn't know he had one." The Wabbit's smile was grim. "He doesn't advertise it.  Ah, here we are."  Wabsworth suddenly lurched and gasped, "Where am I?" Lapinette wanted to get to the point. "Where were you, Wabsworth?" Wabsworth's innards grumbled long and loud and he shed some of his coat. "My circuits were in the grip of a daemon, a trickster, a space traveller." The Wabbit looked down and punched buttons on his walkie talkie. "Transport for three please." Then he turned to Wabsworth. "Was this traveller a pain in the backside?" "He was a pain in every side," replied Wabsworth, "I was forced to be Emperor Cuniculus and act imperious." "How did that feel?" asked Lapinette. "Powerful yet impotent," growled Wabsworth. "Events took place and I could do nothing to alter them." "Sounds like life," murmured the Wabbit. He picked up the remains of the travellers cloak and sniffed them. "Something familiar," he murmured.  Quantum locked onto their coordinates and they shimmered and vanished.
at August 11, 2016