17. The Wabbit fights for Control 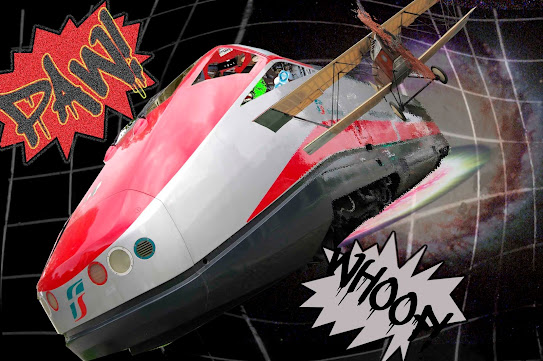 The Wabbit dived onto Quantum's footplate and grabbed at the Space Traveller. But he only had a hold of a feline tail. Skratch the Cat let out a piercing yowl and the phantom materialised at the controls. The Wabbit rolled and kicked a lever. Quantum lurched out of lattice drive and Skratch and the Wabbit dropped to the floor with a crash. "Grab him!" yelled the Wabbit. A swipe of Skratch's paw brought a yell of pain but the Traveller eluded every attempt at capture. The Wabbit's ears twitched at the sound of an engine and he staggered to the windscreen. Susan the Biplane screamed beside the cab. Her single air screw looked like jelly and with every turn it got bigger. Suddenly a stream of molten alloy span towards Quantum's windscreen. Quantum kicked into lattice drive. The jerk shook the Traveller from the controls and he sprawled headlong onto the footplate. The Wabbit jumped on him several times and once again for luck. The Traveller tried to change shape but the Wabbit's hind legs were too strong. Skratch pummelled the Traveller with both paws and he hissed. "You're under arrest." The Traveller had a voice like a dental drill. "Whaaat foooor?" "Anything we care to make up," snapped the Wabbit. Then he grinned with all of his 28 teeth. "Because in space, no-one can hear you complain."
at August 22, 2016