15. The Wabbit and the Exit Strategy 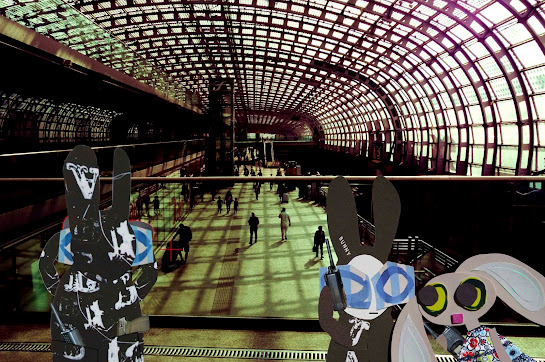 Quantum was a time travelling train and easily overtook the Sombrero Shuttle by Spica 3. There they lay in wait for the Space Traveller. "We don't know what form he'll take," whispered Lapinette. The Wabbit grimaced. "I'm relying on Wabsworth. He has the glasses." Wabsworth stiffened and focused. "I can feel him, he's on the concourse." Then he shook his head. "He is here, but that's not him." The Wabbit turned. His eyes settled on the passenger with the big bag and he made a squinty face. He nudged Lapinette. "That's a big bag to be travelling with."  Lapinette scanned it up and down. "It's made of aggregated diamond nano rods." "Not cheap," said the Wabbit. "If you're paying," smiled Lapinette. "Is it big enough to take care of a floozy?" asked the Wabbit. "It's big enough to take care of itself," replied Lapinette. The Wabbit lifted his radio. "Wabbit's the name. Gumshoe's the Game." The radio whined. "Commander?" "Quantum, can you get a transport fix on the man with the suitcase?" There was a long pause. Wabsworth kept his binoculars trained on the bag. Suddenly the bag pitched to one side and fell off its wheels. "It's him!" cried Wabsworth, "The phantom is in the bag." The Wabbit growled into his radio. "Now Quantum! Bag, Tag and Drop!" The suitcase shimmered and vanished. "He exceeded his weight allowance," hissed the Wabbit.
at August 17, 2016