10. The Wabbit in the Quantum Caffè 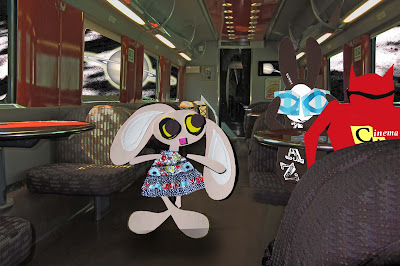 Quantum the Train continued to vibrate as he whistled down the hole in the Void. The Wabbit put his paws to his head. "My head feels this big." "It is that big!" yelled Lapinette. Skratch the Cat looked at the Wabbit. "What in the name of feline felinity is going on?" Lapinette hopped up and down. "This is the silliest adventure you ever got me into!" The Wabbit sighed. "You can say that again!" "This is the silliest adventure you ever got me into," said Skratch. The Wabbit looked out of the window. "We're still in a hole?" Quantum always spoke over the loudspeakers for effect. "It's more of a tunnel, Wabbit." The Wabbit groaned. "How long, Quantum?" "It doesn't have length exactly," said Quantum and he sounded his horn, a single tone blast that fried the ears of anyone close. Although this was without substance in the Void, passengers flinched and reached for painkillers. "That Emperor is not who he says he is," said Skratch. "Enlighten me," sighed the Wabbit. Skratch pawed the air. "He's a meddler, a buttinsky, an intergalactic pain in the backside." "A quidnunc!" hissed Lapinette. "What's a quidnunc?" asked the Wabbit. "A busybody who went to college," purred Skratch. Quantum's horn blasted again and his voice growled though the speakers. "Something coming our way." Lapinette's paws prickled. "What kind of something?" A bang shook the dining car as Quantum reversed Lattice Drive and sped backwards. "Something differently different ..!"
at July 27, 2016