The Wabbit at the Adventure Pub 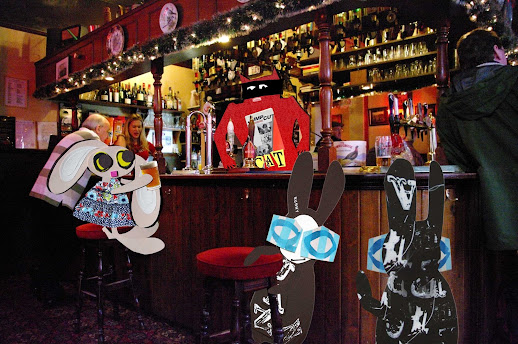 The Wabbit grabbed a stool as quickly as he could. "These are like gold dust in here," he yelled, "give me a helping paw, Wabsworth." Skratch's familiar voice floated across the bar. "What will you 'ave today father?" Glasses tinkled as the Wabbit crashed his stool around. Lapinette chimed in. "Can't you see the state of my glass?" "It's full," said Skratch. "Not for long," said Lapinette and she drank it back in a single gulp. "You don't like beer," said the Wabbit with a puzzled voice. "It ain't beer," smiled Lapinette and she winked at Skratch. Wabsworth shook his head and adopted a Cockney accent. "Wot kind of adventure was we in then?" "Horror-alien sub genre," said Skratch. "What with all these bleedin' troublemakers, it stands to reason, dunit?" Lapinette was sceptical and now she had acquired another glass. "The invaders looked just like us, and so they weren't so alien." "And they came from inside us, not outside," added Wabsworth. "Contamination," said Skratch, refusing to give up on his original argument. "But you can't have contamination from inside," said Lapinette. "Oh yes, you can," said Skratch. "It's an attack from the worst of places - inside us." The Wabbit began to feel left out. "A metaphor for loss of identity through contamination of the self?" Lapinette looked at her drink and thought for a while. Skratch polished glasses. The Wabbit span on his stool. Finally, Lapinette spoke. "My self needs a refreshment."
at July 01, 2016