5. The Wabbit and the Rabbit Moons 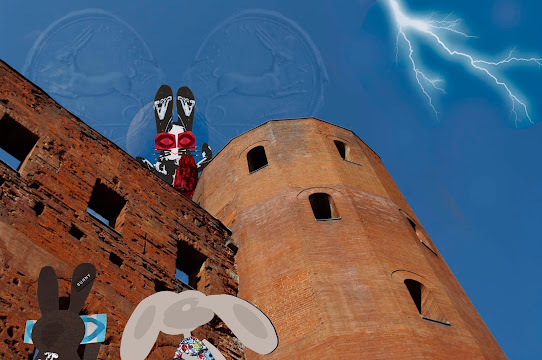 It had been the Wabbit's idea to go to the old Roman gates. Emperor Cuniculus agreed readily but when he saw them he began to change. He became bigger and bigger and floated skywards until he looked out from above the Tower. A moon appeared, hazy against the bright daytime sky. Cuniculus raised his paws and spoke. "Ex luna scientia." The moon became three. "Mater Luna!" cried Cuniculus. "Regina nocias, adiuvo me nunc." The moons became coins and on the coins were rabbits. "That's the coin," yelled Lapinette. "That's the coin I found." For once the Wabbit was lost for words. Cuniculus raised his paws once more. "By my ears!" The moons shimmered and changed place. "By my fur!" The moons coalesced and divided - then merged again in an elegant dance across the firmament. "Take me back," shouted Cuniculus. "Take me back to the ancient time when rabbits ruled the night." Light began to fade until it seemed like the darkest winter. Lapinette clutched the Wabbit's paw and although it was hot, she shivered. The moons brightened and shadows cut across the grass. Now the gates were fading and substantial though they were, they seemed like tissue.  "Something's going to give," muttered the Wabbit and he clutched Lapinette's paw. Thunder cracked and everything around them vanished. The Wabbit felt around, but his paws met nothing. They were in a void. "Where are we?" asked Lapinette. "Nowhere," said the Wabbit.
[Regina nocias, adiuvo me nunc.  Latin: Queen of the Night, help me now]
at July 15, 2016