8. The Wabbit and the Great Escape 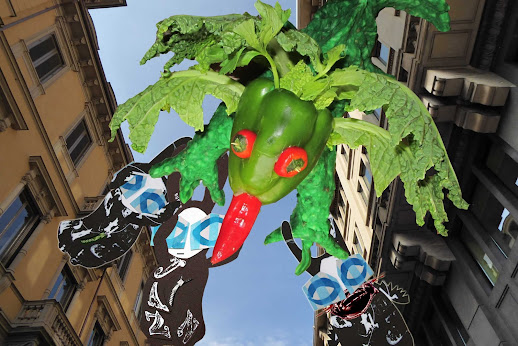 Turbulent air filled with cabbage leaves as a winged creature dropped from the sky. The Wabbit and Wabsworth found themselves high above the street in the safe clutches of Terni the Food Dragon. They looked at each other and then across to Terni's other talon. The monstroid creature was gibbering. "Is this an extra wabtax?" "Yes!" yelled Wabsworth. "No," shouted the Wabbit. His stitches were aching and he longed to scratch. "Where shall I drop this thing, Commander?" roared Terni. He flexed his monster wings and looped high above the rooftops. Terni's nose was pepper hot and the Wabbit fidgeted in a bad tempered way. "The Mariana Trench," he spluttered. Terni's breath painted an enormous "W" in the sky. "That's much too far, Wabbit. Would you settle for Etna?" The creature stopped drooling for an instant. "I yearn for the deep, wabtanic caverns." "What could possibly go wrong?" shrugged the Wabbit. "Just about everything," said Wabsworth, "and now I need a new coat." "Invisible mending," said the Wabbit. "Where?" asked Wabsworth. "Edinburgh," suggested the Wabbit, "my kilt maker will do it on the spot." Wabsworth nodded and spoke to Terni, "Change of plan for monster dropping." Terni smiled with a puff of fiery peppers. "Give the word." It was the Wabbit's turn to smile. "Loch Ness ... but drop us off at a pub."
at June 29, 2016