2. The Wabbit and the Surprising Dig 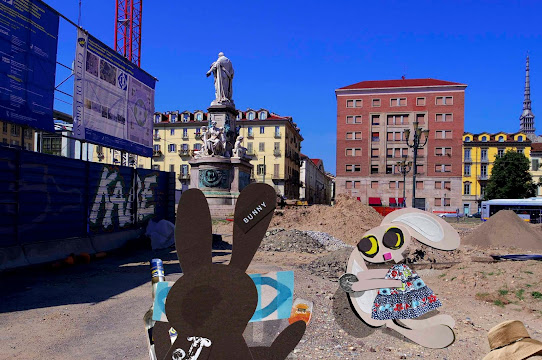 "This isn't what I imagined, Wabbit." Lapinette was none too pleased, but she carefully sifted through the building site rubble nonetheless. "I did my best," said the Wabbit. "It was short notice." By way of compensation, the Wabbit produced a bottle of Aperol and a filled glass. "The restaurant on the piazza would like the building work to finish." "I'm sure it does," said Lapinette. "And so would I." So far she'd come up with nothing archaeological but grit and dust - and most seemed to have gone down her throat. "They had to reroute the trams," said the Wabbit by way of conversation. "Oh dear," said Lapinette without conviction. She sifted a bit more. "Hello!" she exclaimed. "I already said hello," quipped the Wabbit. "This is important, Wabbit," sighed Lapinette. "It's an old Roman coin." The Wabbit shrugged. "Masses of them round here, you can't move for old Roman coins." Lapinette held it up. It has a rabbit on one side." "What's on the other side?" laughed the Wabbit. Lapinette turned it over. "It's another rabbit," "No emperor?" asked the Wabbit. Lapinette gently wiped the coin with her fur. "It says Emperor Cuniculus." The Wabbit gasped. "Then the legend is true!" Lapinette looked puzzled so the Wabbit explained. "They say that for a brief period, the Romans were led by a rabbit of enormous power." He pulled a whistle from his fur and blew it. Then he yelled with all his might. "Down tools! Everyone stops work. This site is hereby closed until further notice ..."
at July 09, 2016