3. The Wabbit and Emperor Cuniculus 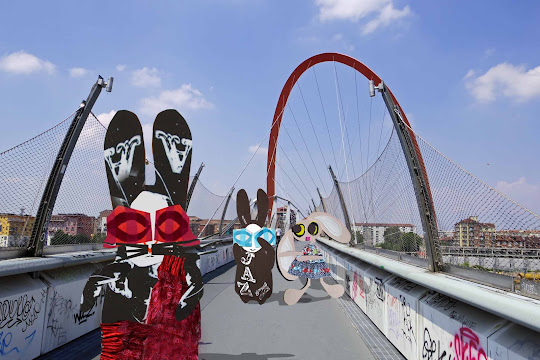 "It has to be him," said the Wabbit. Lapinette shook her head. ""He's in fancy dress." Now the Wabbit shook his head - only more vigorously like a donkey. "It's Emperor Cuniculus." Lapinette wouldn't have it. "Perhaps he's a hipster." "Hipsters don't do much," said the Wabbit. Lapinette nodded in agreement. "What's he doing here, then?" she asked. Lapinette was wearing a look that the Wabbit knew well and so the he thought hard. "He's looking for his coins?" he suggested. Now Lapinette giggled. The figure turned and stared. Then he grunted in a bad tempered manner, stuck his nose in the air, wheeled and proceeded to the end of the bridge. "See!" said the Wabbit, "he's imperious." "That doesn't make him an emperor," sighed Lapinette and she giggled quietly. "Look Wabbit," she said, "That's not a robe, it's a bit of old curtain." The Wabbit became defensive. "Maybe it was the best he could do at short notice. He's come a long way" "It's just a coincidence," retorted Lapinette. The figure turned again. "I am the great Cuniculus. Kneel before me and pay homage." The Wabbit screwed up his nose. "I'm completely out of homage, but I'm on my way to the shops." "Kneel!" shouted the creature. "I'm not Neil, I'm the Wabbit." said the Wabbit, "but you can call me Commander." The creature raised a paw and a rumbling of thunder shook the bridge. "Oh, it was such lovely weather," groaned Lapinette. Cuniculus frowned and stamped his foot twice. "What land is this that has such creatures in it ..?"
at July 11, 2016