6. Skratch and the Lost Wabbit 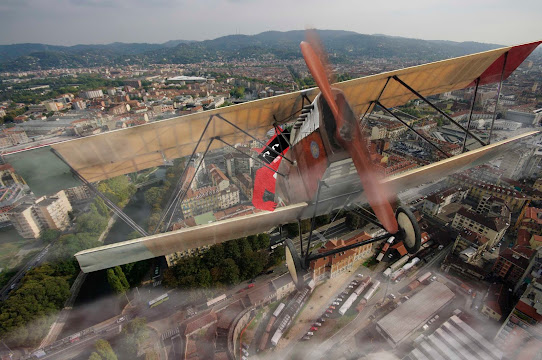 The Wabbit and Lapinette had been missing some time. Not a single sighting had been reported for days and the Department was in a state of alarm. Skratch and Susan the Biplane buzzed a parallel sweep across the city but there was no sign of the pair of them. "Anything?" muttered Skratch, although he knew the answer. "No Sir," said Susan. She dropped altitude and started again. "I don't have a rank," said Skratch. "I'm a cat." "You sound like the Wabbit," said Susan. Her airscrew sliced the air with a monotonous whine. Skratch grinned then paused. "Hey, wait a minute, I saw something." Susan circled and held steady. Skratch hesitated. "What I really meant was, I didn't see something." "Explain," said Susan. "It's curious," meaowed Skratch. "I can't see the Roman Gates." Susan dropped further. They could make out streets and grass and trees - but of the old Roman Gates, there was no trace. "What about that mist?" asked Skratch. "No mist was forecast," said Susan sternly. Suddenly she shot upwards but the mist followed. Skratch stared at Susan's wings. They shimmered in a translucent haze. "Should I be able to see through your wings?" he asked. "I'm disappearing," said Susan, "and so are you." The mist enveloped Skratch's paw and his paw vanished. He could feel it, but no matter how much he shook it, it simply wasn't there. "We're getting lost in the mists of time," hissed Skratch.
at July 18, 2016