1. The Wabbit and the Slow Sabbatical 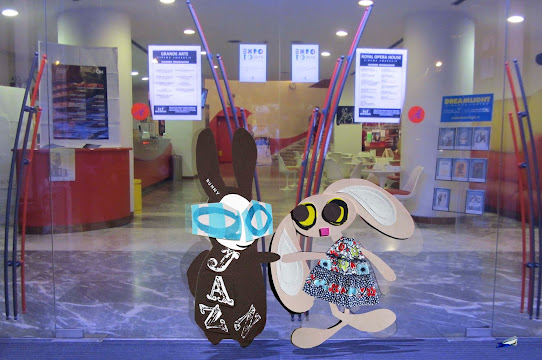 "Did you find anything?" Lapinette had looked forward to a night on the town, but the Wabbit shook his head. He gestured with a flick of his ears. "It's closed. Nothing there but dusty leaflets from last year." Lapinette looked disappointed. "What about the Grand Opera?" The Wabbit sighed. "Been and gone. We missed it" "I suppose we were far too busy having adventures." smiled Lapinette. The Wabbit allowed himself a lop sided grin and agreed. "All work and no play." They were quiet for a while. A chewing gum wrapper drifted slowly down the sidewalk and disappeared round a corner. The Wabbit watched it go. "I can't take the excitement," he muttered.  Lapinette thought. "Perhaps we need a hobby." The Wabbit's nose wrinkled. "We're not pensioners yet." "Then what about the Carrot Club?" said Lapinette. The Wabbit sniffed haughtily. "The Carrot Club closes in the summer for us to take sabbaticals." Lapinette was delighted. "So that means we can all go somewhere nice." "Well, it has to be carrot-related and vaguely educational." said the Wabbit quickly. Lapinette suddenly saw herself on an archaeological dig, carefully brushing dust from a fossilised carrot. Then in her vision, she raised her head and fanned herself with a linen hat. Helpers were preparing drinks and bearing them on trays to a large tent. "I have an idea," said Lapinette.
at July 05, 2016