4. The Wabbit and the Monster Inside 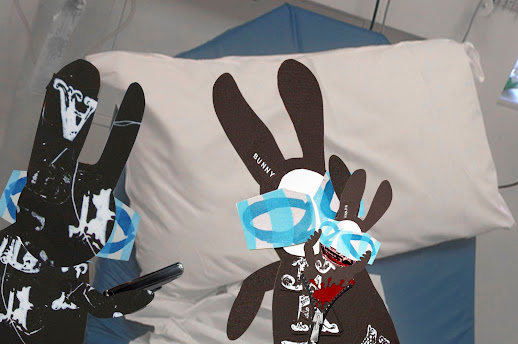 Wabsworth heard a cry and he went to check on the Wabbit. The Wabbit was gasping, almost choking. Suddenly his chest heaved with an enormous bulge and his stitches flew open. With a high pitched scream and a whirring of serrated paws, a creature that looked just like the Wabbit burst out of the Wabbit's chest. Wabsworth pulled an automatic from his fur, but he failed to get a sight on the creature that would miss the Wabbit's vitals. "Gerrorrr it off!" yelled the Wabbit and he whacked the creature with all his strength. His strength wasn't quite up to par, but the creature slewed to the right and its paws scythed air. Wabsworth hit it with the grip of the automatic and it somersaulted onto the bed. The Wabbit lashed out with his legs. There was nothing wrong with the Wabbit's kick and the creature hit the deck with a massive thud. A scream that could cut metal tore air, and the scream got louder. Wabsworth covered his ears. Whatever it was tried to climb onto the bed but the Wabbit's feet smacked the menacing mouth square on. Drool sprayed everywhere. Now Wabsworth had a clear shot and he fired - but the thing was quick. The mattress smoked with gunfire as the creature headed for the door. "Stop it!" yelled the Wabbit and he zipped up his stitches. He tried to get up and his groan joined the scream as he hit the floor hopping. Wabsworth's face was a fury. "Leave it Commander, I'll get that parasite." "This is personal!" yelled the Wabbit.
at June 20, 2016