3. The Wabbit and the Waiting Crowd 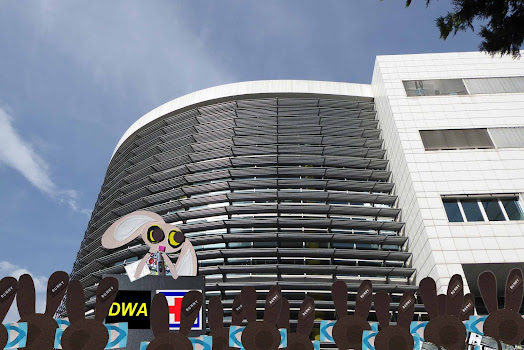 The Wabbit's personal guard, the 400 Rabbits, gathered outside the hospital, waiting for any news about the Wabbit. No-one quite knew who had tipped them off, but everyone was there. Lapinette decided to give them a briefing, mainly in the hope they would go away. But she had no idea what to say. "The Wabbit is comfortable," she announced. "How comfortable?" shouted one of the 400. "On a scale from one to ten," shouted another." "Em, five point one," said Lapinette. She held aloft a report which was entirely blank, but looked official enough. The 400 rabbits talked amongst themselves. "We brought salad sandwiches for the Wabbit," they shouted, "and grappa." Lapinette flourished her report. "The Wabbit has to fast!" A murmur of disappointment rippled through the throng. Lapinette adopted her most official voice. "I must ask you now to leave so that the Wabbit may rest." "We're not going," shouted the 400. "We brought tents." Lapinette was running out of steam so she grasped at straws. "The Wabbit left vouchers so that you could all enjoy a night on the town." "And leave the Wabbit?" shouted the 400, "no way!" Lapinette sighed inwardly then pretended to scrutinise the report. "The Wabbit may need blood," she shouted. "Please report to hospitals across the city ... to donate." The 400 dispersed with speed leaving nothing behind but the odd grappa bottle. Lapinette spoke quietly to herself. "If I'd told them, the Wabbit would bust his stitches."
at June 16, 2016