6. The Wabbit and the Street Screamer 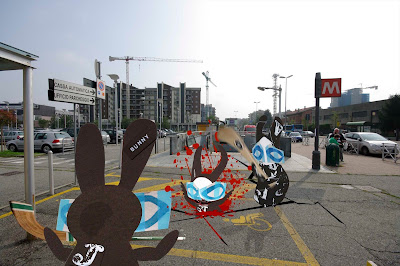 The creature's whine was like a thousand air screws. Cracks in the paving spread towards them. Blood seeped through the cracks. The Wabbit and Wabsworth grabbed some sticks from a passing hurling team and waited for the inevitable. With an explosion of blood, the creature emerged and darted towards the Wabbit. The Wabbit stood like a goalkeeper. He waited for the cracks to reach him and raised his stick high. Wabsworth snuck up from the back and hopping forward he whacked the creature with all his strength. Wabsworth was an android and his whack was considerable, but the creature didn't stop. The Wabbit suddenly swiped and this time he caught the creature off balance. Something rolled away. Wabsworth trapped it between his feet. "Commander!" he yelled. "It's synthetic." "I hate bio-mechanical monsters," murmured the Wabbit and he hit it again. Another component bounced along the sidewalk. The screams were deafening. "Wabbawabbawabba" moaned the creature and it dropped into the crack. Wabsworth looked round. Serrated arms clawed through asphalt as the creature sprang at him. But Wabsworth was no longer there. From behind, Wabsworth brought his stick down with a savage blow that disassembled the creature's head. The Wabbit looked relieved but it was short lived. Wabsworth clutched his chest. "Commander? There's something moving inside me."
at June 24, 2016