7. The Wabbit and the Angry Piano 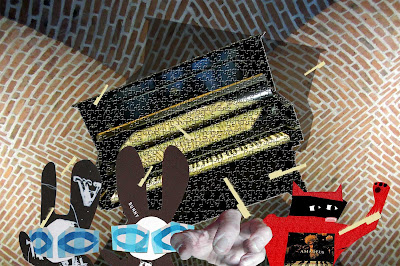 The severed hand played until it was exhausted but the piano demanded more. Its pedals clattered and its keyboard snapped yet still it was unsatisfied. Preludes gave way to etudes. Nocturnes, ballads and scherzos passed without pause. When the hand exhausted the classics, it played boogie woogie, bop and blues, until it had consumed the entire breadth of jazz. But the piano was insatiable. It bounded in the air and rocked around the clock. "I think we should go." The Wabbit's voice was a murmur but it came out loud. Five fingers swept the length of the keyboard and slammed down hard, and then the hand somersaulted and flew in the direction of the exit. "Follow that hand!" yelled the Wabbit. Everyone followed, but so did the piano. It had lost a few panels by this time and the lid flapped wildly, but its keys crashed out a macabre version of the Planet Suite. Drama and violence dripped down walls like molten plastic as the deranged piano charged relentlessly, "Run! Run or we'll B flat." Skratch thought a joke might help and it certainly made a difference. The piano chattered menacingly and picked up speed. Ivory spat in all directions. "It can't hold the keys!" yelled the Wabbit.
at June 02, 2016