2. The Wabbit and the Hospital Run 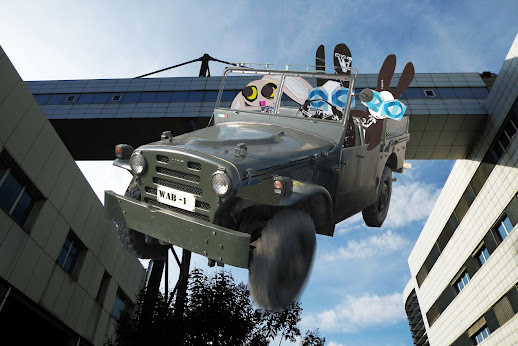 Wabsworth took an unorthodox route to the hospital. This involved the illegitimate use of three walkways and a pedestrian tunnel. The Wabbit didn't seem to care about that. Nor did he comment on the trail of street furniture that Wabsworth left in his wake. So Wabsworth knew the Wabbit was seriously out of sorts. The hospital had several entrances but Wabsworth ignored them all. If he could have driven directly into the emergency ward, he would have. Instead he took the fastest route. He crashed through the back gates, drove up several flights of stairs, then jumped from a connecting bridge. "Nice view," slurred the Wabbit. Lapinette's teeth jarred. She held on with both paws and kept a mental note of the damage. "It's over there," she shouted and she pointed a paw. Wabsworth slid between two squad cars and left tyre tracks on the hood of a highly polished vehicle belonging to the Finance Police. Lapinette scribbled an apologetic note, attached several meal tickets and threw it out. Wabsworth screeched to a halt and lifted the Wabbit from the jeep. "Whassa matter?" asked the Wabbit. "Am I going on a lovely vacation?" He convulsed and clutched his side suddenly. "I have a rabbit in my tummy," he announced solemnly, "his name is Ernie." "Emergenza! Agente ferito. Codice rosso!" yelled Lapinette.
[Emergenza! Agente ferito. Codici rosso! : Italian - Emergency. Officer injured. Code Red]
at June 15, 2016