6. The Wabbit and the Ghostly Notes 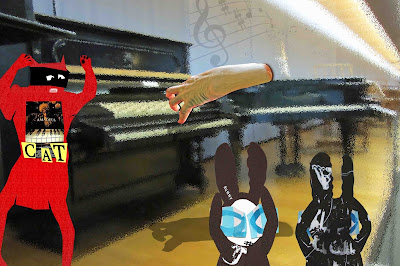 The Museum's Piano Room was huge and the severed hand sped along the line of pianos and back. With a prod of a poky forefinger it tried this one and that - until it settled on an upright piano of considerable size. The hand played a tune on ivory keys that had seen musical evenings of many years. They had suffered the touch of a thousand hands and were worn here and there, but they had never endured anything like the onslaught that the severed hand meted out. The Wabbit and Wabsworth felt their ears turn to jelly. The floor shook beneath their feet as the piano shuddered into a tune. "Graceful Ghost Rag!" shouted Skratch. But the Rag was as graceful as a spectral sausage. "The hand can't syncopate," yelled the Wabbit. "All hands sign the plate?" queried Wabsworth. The hand stopped. Then it switched to D minor. No single hand had ever played Beethoven so sweetly - and no hand would ever do so again. The piano lifted into the air and swayed as the hand tinkled Ghostly Waltzes. Skratch pirouetted and exclaimed he'd never been so moved. With a sudden jolt, the piano crashed on the polished floor and the music halted abruptly. To everyone's astonishment, pianos keys moved independently and the piano began to speak. "Does the hand do requests?"
at May 31, 2016