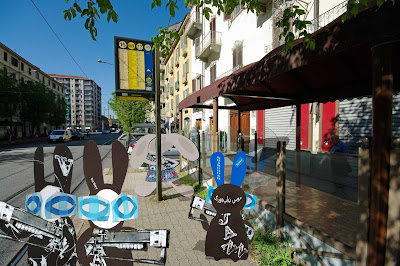 "I need to capture some Murmurants," said the Wabbit. Wabsworth's eyes scoured the rooftops and he waited. "I need them in reasonably good shape," added the Wabbit. Wabsworth was the Wabbit's android double, but much had passed under the bridge since he was made. So his question was more of a statement. "You want their technology?" "Can you tweak it?" asked the Wabbit. Wabsworth pointed his snazer gun at a window. "I can. But I could use some time and luck." Khargoosh took in his half reflection in a the caffè glass. "You can't escape luck," he muttered in Arabic. The Wabbit laughed. "Then time is our only problem." Lapinette stared into the distance. The city was quietly waiting with not a soul around to keep it company. No trams, no buses, no smell of coffee. Lapinette's snazer suddenly whined as it charged. "I saw movement." Khargoosh screwed up his eyes and peered past Lapinette. "I can see shapes. They're moving like they're injured." The whine from Wabsworth's snazer pierced the summer air and he turned. "Perhaps someone gave them a kicking." The Wabbit kept his eyes forward and powered his snazer to maximum. "Then surely ... they require assistance." Lapinette slipped her edged weapon from a back pocket. "Let's take them to a place of safety and look after them." "Lucky rabbits," said Khargoosh.
at September 07, 2015