2. The Wabbit - Source of the Squeak 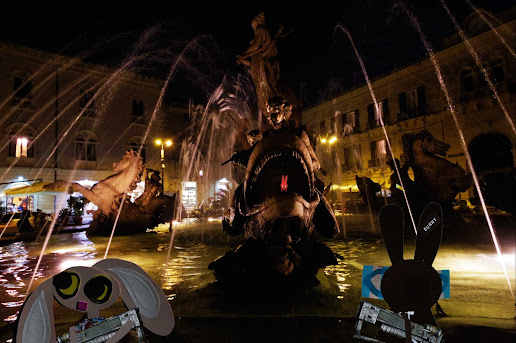 The squeak was hard to follow but gradually the darkness of the outskirts gave way to a plaza. Yet as light unfolded so did the deafening sound of splashing water. "It’s only a stone fish," said Lapinette. The fountain was extremely loud. “A bone dish,” muttered the Wabbit, “no problem then.” He hopped closer to the gaping mouth of the big fish and noticed the rider seemed to have a pistol. Then he hopped closer because he'd caught a flash of a fishy tongue. "A fish has no tongue," said Lapinette. "This one has," replied the Wabbit. Lapinette sighed. "Try talking to it." "OK," shrugged the Wabbit and he called into the fish mouth. "I'm just a tourist." He saw a flash of red so he added an explanation. "Just passing through your little town!" The Wabbit waited for a small red creature to emerge and after a while it spoke. "Show me your paws." The Wabbit held up both paws. "Brown paws are good," said the small red rabbit, "black paws are bad." The Wabbit thought if he waited, he might get an explanation. "The Paws of Darkness destroyed us all," said the rabbit. "I am the last of the Magic Red Rabbits - and forever doomed to be pursued." Lapinette turned. "Maybe you could you could use a helping paw?" The Magic Red Rabbit squeaked softly. "How can you possibly help me?" The Wabbit's ears quivered in such a manner that light gusts scattered water to and fro. Lapinette knew he was annoyed so she was unsurprised when the Wabbit's 28 teeth flashed like neon. "We will pursue your pursuer." The Magic Rabbit shivered and squeaked. "Abandon hope ..."
at September 24, 2015