13. The Wabbit marshals the Troops 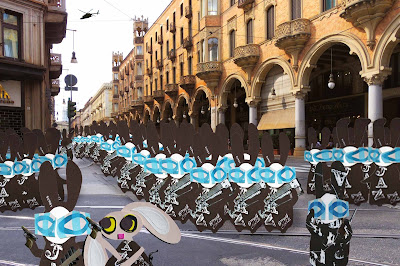 The Wabbit knew that Wabbit Con was out of control. Certainly the team could hear sporadic small arms fire in the distance as rival factions warred. "It's time," said the Wabbit, "to put a stop to this." With breathtaking speed, four hundred rabbits loped through the streets. At 150 hops per minute, the sound of the Wabbit's elite guard was deafening. Specialist units broke away and fire teams poured through side streets in pursuit of trouble. "I need intel," said Lapinette. The Wabbit had to shout. The Murmurants are sponsored by rabbit pure-breed supremacists called BLU." "Never heard of them," shouted Lapinette. The Wabbit shook his head. "Suddenly they had resources. They came looking for us." Wabsworth yelled across. "BLU is using the Murmurants to discredit us. It calls us the Jambalaya." The Wabbit scowled. He slid a magazine into his automatic and yelled. "We need to take them in." Lapinette placed a paw on her favourite edged weapon. "Any ideas?" "Our agent, Major Spitlove, found their weakness," said the Wabbit. "They'll do anything for teabags," "Pyramid teabags," shouted Wabsworth. "They say they're the purest." The Wabbit checked his bandolier. "That's how they set the Comic Con bomb. They used a vast array of LED tea lights." Being a rabbit, Lapinette was unable to spit. But she made a valiant attempt and grimaced. "Ruffians!"
at September 04, 2015