4. The Wabbit in the Hall of Darkness 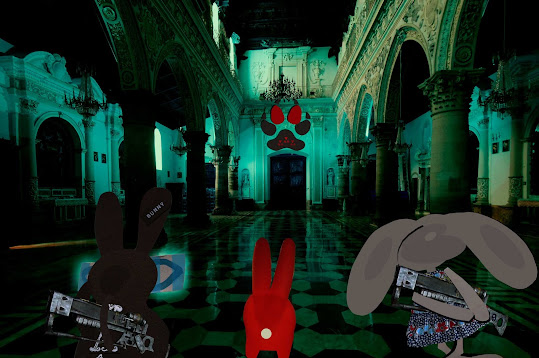 In the blast wave that came with the howl, the Wabbit did something special. He murmured something no-one could hear and his blue glasses lit with an incandescent glow. A scene emerged that was far different from the space they'd occupied. "The Hall of Darkness!" gasped the red rabbit. "I couldn't be bothered to knock," shrugged the Wabbit. The magic red rabbit stared at the door at the end of the Hall and gasped. "This is the stuff of fable." Lapinette smiled. "The Wabbit's fable manners are far from perfect." Together they hopped forward but the closer they got, the louder the howling became. It was a combination of malice and menace that chilled the air to ice. "Air conditioning?" quipped the Wabbit. A voice boomed through the pillars. "We can smell you, rabbits. Come no further." The Wabbit's glasses glowed intensely and warmed the chill. "Release the red rabbits and their songs," he yelled. Stone and plaster fell from the roof and crashed to the floor. "Puny creatures," boomed the voice. "Give us the red rabbit and we'll let you go." The Wabbit's 28 teeth gleamed like swords. "Open the door or we'll open it ourselves." "How will you do that?" sneered the voice. The Wabbit delved into his fur, grasped an object and shouted with all his might. "This will take the door from it's hinges and you with it." In the silence that followed, a series of clicks sounded like thunder. The door swung open. "Explosives?" asked Lapinette. "Swiss army knife," said the Wabbit.
at September 28, 2015