15. The Wabbit : Reflectance of Light 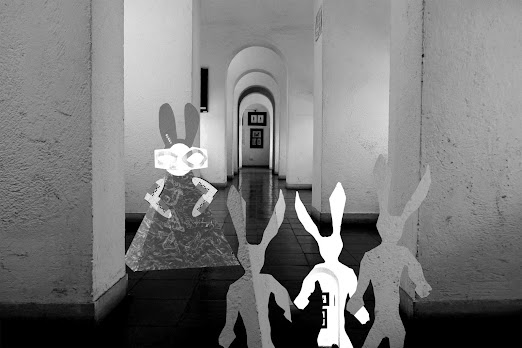 If the Wabbit knew one thing, he knew about light. And intelligence suggested the Murmurants were crazy about pyramid tea bags. So he glided into the interrogation corridor on invisible leaves. The Murmurants tried to take up his colour but the light was average and they felt extreme discomfort. The Wabbit's eyes flashed with sudden brightness. "I don't care about you. Tell me of your technology." Murmurants writhed in the average light. "We can't!" The Wabbit's eyes flashed again and his ears swayed. "Can't or won't?" Grey tone drained from a Murmurant. "It's called furtive fur." Light from the Wabbit fell with an average edge. "How?" he snapped.  A Murmurant sagged. "With a quantum honeycomb lattice." The Wabbit's eyes grew grey until they almost vanished. "Aaagh," cried a Murmurant. "His light has no direction. I can't get a fix." "Details now!" snapped the Wabbit. "The light bends towards us, then we reflect it back," gasped a Murmurant. "Our fur is made of quantum dots. Where the light goes, we go." The Wabbit smiled. "OK.  Now you're free to go." "Go where?" trembled a Murmurant. "The Canteen," shrugged the Wabbit, "for light refreshments." As they turned to go, the Wabbit yelled. "One more thing!" They shivered in the grip of the Wabbit's stare. "Who do you work for?" The Murmurants shuddered. "They call them The Paws of Darkness ..."
at September 09, 2015