1.The Wabbit and the Moonlit Landing 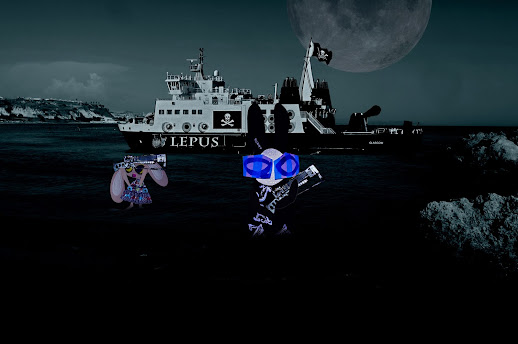 With all the stealth that its diesel engine could muster, the Lepus crept in to a small bay near Marina di Modica and lay still. A casual moon beamed quietly on two figures as they waded ashore. The Wabbit cursed silently as a chunk of driftwood bit a paw and Lapinette cast an eye along the beach. "Not much here." The Wabbit widened his view but only saw provisional shapes. "They don't advertise." The thrum from the Lepus died. "Jenny's finished with engines," murmured Lapinette. "Eight bells and all's well," said the Wabbit. Lapinette's Snazer whined like a hundred mosquitoes. The Wabbit's Snazer had three main settings - confound, astonish and blow away - but Lapinette had developed another. He recognised the overwhelm setting and nodded. "I'm uncertain what the Paws of Darkness look like." "Gloomy?" suggested Lapinette. The Wabbit pricked up his ears and listened. "I can hear them." Lapinette knew better than to question the Wabbit's logic. She hopped out of the water and her ears swung right then left. "I can hear something else." The Wabbit waited while Lapinette made a judgement. "Something squeaky that way ran." "Did it have a colour? asked the Wabbit. "I couldn't hear its colour," answered Lapinette. High on the mast, the skull and crossbones snapped and crackled in the windless air. A hot chill rippled through the Wabbit's fur and he shouldered his Snazer. "Let's hop to the grid coordinates." Behind, the moon and the Lepus shimmered and disappeared as the night swallowed them both.
at September 21, 2015