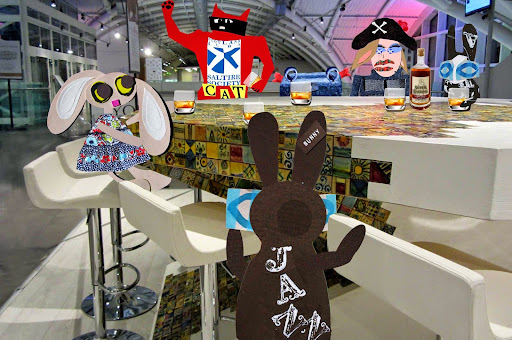 It had been a long adventure. Now the team assembled at a special venue for preprandials. The Wabbit and Skratch the Cat arrived late at the very same moment. "Whit was that for a kind of adventure?" laughed Stone. Skratch addressed the Wabbit directly. "It was complete excess," said Skratch. "A diabolical cross between Visconti and Spielberg." The Wabbit looked chirpy and reached for his glass. "It was colourful, eventful and ultimately far too long," added Lapinette. The Wabbit's face fell. "It was the explosives," he murmured to no one in particular. "Don't worry about it, Sonny," said Stone. "It might have featured a lonely stone struggling for survival in a Scottish village." "In 1945," said Wabsworth dreamily. He was nestling in the corner nursing a glass of rum, feeling cosy. "We had more battles than Braveheart," laughed Jenny. Now the Wabbit laughed. "I thought I was in trouble," he smiled. "You are," glared Lapinette. "The damage cost plenty, Wabbit." "Take it out my Dinosaur Fund," suggested the Wabbit. "Not enough," said Lapinette. "Via Arsenale Sports and Social Fund?" "Hardly," said Lapinette. Stone raised his voice. "Dinna fash yersel*. I have enough in gilts, Sonny," Lapinette looked inquisitive. "When do the gilts expire?" asked the Wabbit. "They're from 1694, they're in perpetuity," said Stone. "Endless!" said the Wabbit. "Like my love for you, Lapinette."
[Dinna fash yersel: Don't get worked up, don't bother about it.]
at August 20, 2014