12. The Wabbit and the Droning Stone 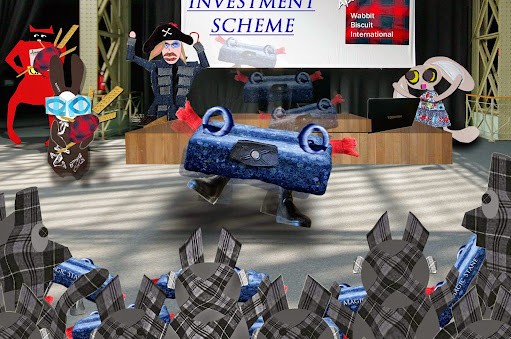 The MacDrabs pricked up their ears as they became aware of droning behind the screen. It got louder and louder and louder. Suddenly there was a tune and the MacDrabs swung to their left as the Wabbit and Skratch the Cat marched into the hall playing bagpipes. But they were so intent on watching that they missed Stone as he burst through the screen. "Heuch!" he shouted. "Heuch!" shouted Lapinette and Pirate Jenny and they flung their arms in the air and danced. "Sae glad yer a' here," shouted the Stone and he pirouetted around. Now the MacDrabs were angry. "We've come to get ye," they screamed. "You've a' got yer ain stanes," said Stone." "You're the one," shouted the leader. "Get him!" But they couldn't move. Stone floated gently to the floor and the bagpipes stopped dead. "Try and let go of your stones, MacDrabs." Stone's laugh menaced the silence. The MacDrabs shook their paws frantically, but they were stuck fast. No matter how hard they tried to break away, they could only tighten their grip. And the stones were getting hot. "Kin ye hear that wee noise, Sonny?" smiled Stone to the Wabbit. The Wabbit listened and ostentatiously fiddled with his chanter. Then he shook his head and turned. "Is that ticking noise coming from your tuning pins, Skratch?" Skratch wagged a paw of dismissal. "Evacuate!" yelled the Wabbit.
(1) Sae glad yer a' here: I'm so pleased to see you all here. (2) You've a' got yer ain stanes: You have stones of your own.
at August 15, 2014