13. The Wabbit and the Big Kaboom 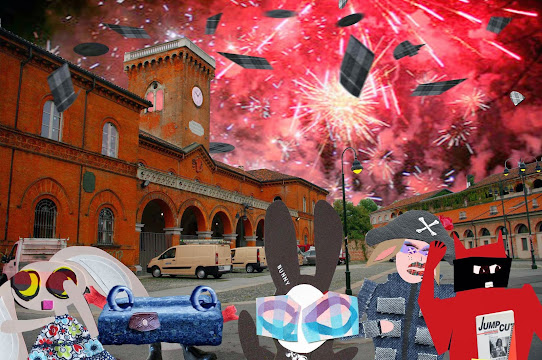 The Wabbit and his team ran for their lives. It was the fastest they had ever ran and that was a good thing. From behind there came a low rumbling sound, then several cracks, then a mighty explosion that sent a shower of MacDrabs high above the city. All became still and they started to slow. "Keep running," yelled the Wabbit. A series of smaller booms shook buildings, then lights in the area flickered and died. "Whit on earth did ye put in the fake stones?" shouted Stone. "CL20," shrugged the Wabbit. "He usually uses C4," yelled Lapinette. "I got it sale or return," yelled Skratch. "It was a bargain buy." "That was a sledgehammer to crack a nut, Wabbit," panted Jenny. Lapinette found time to turn. "And it's going to cost us," she shouted. The Wabbit finally stopped. They turned to look back and a crimson red sky lit their faces. "Worth it," murmured the Wabbit. "Too much damage," stated Jenny sternly. "Urban redevelopment?" suggested the Wabbit meekly. No-one spoke. The temporary silence was only broken by the sound of falling debris. "The job is done," said Stone. "Unless ye have any more enemies in your fur." "Who's buying the aperitivi?" laughed Skratch. "Now that it's all over," said the Wabbit, "I think it's my turn." "All over bar the shouting," sighed Lapinette who was making a rough calculation of the damage. "I'll cover for Attila the Hun here," smiled Stone. "I think this one's my shout."
[It's my shout: I am paying the cost (usually for drinks/meal]
at August 18, 2014