The Wabbit and the Stone Alliance 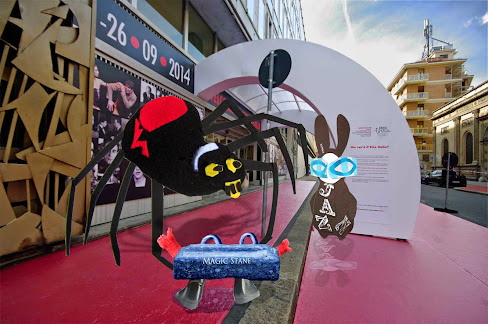 The Wabbit convened a special meeting with Stone and Marshall Duetta Spyder before their audience with Unut in the Dark Basement of the Goddesses. "I need to clear something up," said the Wabbit." "Go ahead, Sonny," said Stone. "You ask away." "You two already know each other?" "Aye we do," said Duetta. The Wabbit looked puzzled, so Duetta went on silkily. "I am the direct descendant of a famous Spider." The Wabbit still looked puzzled. "Roberto Il Bruce!" sighed Duetta. Stone watched as the Wabbit's brain whirred. "The King of Scotland?" he exclaimed. Stone let the Wabbit off the hook. "Bruce had been defeated and his armies scattered." Now Duetta continued. "But in his refuge, a cave, he was inspired by a spider who's endurance was unlimited." Stone laughed with delight. "The spider tried seven times to make her web but eventually she did it." The Wabbit grinned because now he remembered the legend - so he finished the story himself. "Bruce returned to the fray and chased the foreign army away." "That's how we know of each other," said Stone. "I'm the original Stone. I wasn't stolen by the scunner Edward. I was in that cave with Bruce and the spider." The Wabbit threw his head back, laughing with delight. "Sounds like a great film," he smiled. "Stoneheart!" said Stone. "Braveweb," said Duetta. The Wabbit shook his head, amazed. "That chasm on Wablantis is really Bruce's cave?" "And ye took yer time getting there, Sonny" said Stone. "Aye!" said the Wabbit.
at August 22, 2014