The Wabbit and the Guidance of Unut 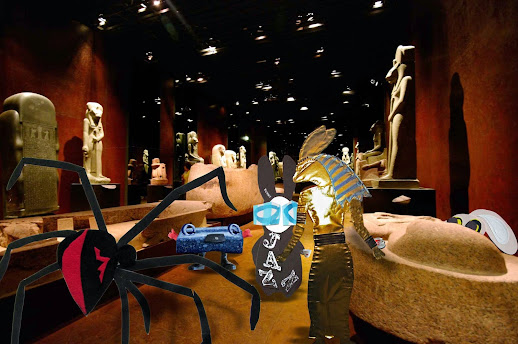 "Commander!" said Unut sternly. The Wabbit wished he hadn't accepted coffee because his paws trembled as they often did when he met the Rabbit Goddess. "Commander, you did well. You drew out the MacDrabs and eliminated them." Now the Wabbit was surprised, because he was expecting just a little trouble. "All in a year's work," he smiled. "You're not finished," said Unut, "but I wish to thank Duetta Spyder for performing her appropriate historical role." Duetta rustled her legs silkily. "Whit aboot me?" asked Stone. "Whit aboot ye?" replied Unut. "Have ah tae hing aboot wae the Wabbit?" "For now," said Unut. Stone was about to say "Great!" but he thought better of it. "Ah suppose ah'll hae tae thole it." he moaned. "There's more work to do," said Unut, "and you Stone, will work with the Wabbit and his team." "Jings" said Stone. Unut turned to the Wabbit. "But first Commander, you clearly need a vacation." The Wabbit's eyes lit up. "You're off to Greece." "Greece?" replied the Wabbit. "Take the Lovely Lapinette," said Unut. "Skratch the Cat and Rabbit Jenny will go with you to ensure you take a rest." Oh, OK," sulked the Wabbit. "You'll need the Jeeps," said Unut. "I'm sending you somewhere remote and roads can be rough." "OK OK," said the Wabbit. Unut frowned. "One more thing, Commander." The Wabbit cringed. "No adventures," smiled Unut.
[Jings: Scottish expression, popularised by cartoon character Oor Wullie (Our William) in the Sunday Post newspaper No translation. Hing aboot: Hang about. Ah'll hae tae thole it:  I have no option but to tolerate it.]
at August 31, 2014