4. The Wabbits seem to be Ignored 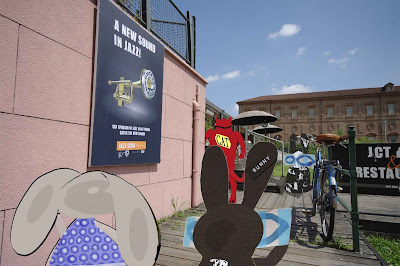 The Wabbit and Lovely Lapinette headed for the Torino Jazz Club which did rather a good carrot aperitivo - and it looked as deserted as everywhere else in the city. But to the Wabbit's surprise, two familiar figures came into view. "Look there’s Skratch!" shouted the Wabbit. "And Wabsworth, your android double!" yelled Lapinette. The Wabbit gazed, because something seemed strange about them. "Lets join them and ask what’s going on," suggested the Wabbit. They chased after them shouting and waving their paws. But no matter how much they shouted and waved, Skratch and Wabsworth paid not the slightest attention whatsoever - and continued into the Club. "Skraaaatch!" yelled the Wabbit with the loudest voice he could muster. "Waaaabsworth!" screamed Lapinette. But it was as if their friends could neither hear or see them. The Wabbit turned to Lapinette and touched her lightly on the paw. "You can feel that, can't you?" he asked. "Of course I can," said Lapinette and she poked the Wabbit in the ribs. "Ouch" said the Wabbit. "So what's happening?" asked Lapinette. "They're OK, I'm afraid it's us," said the Wabbit. "We can't be seen?" said Lapinette. "Or heard," said the Wabbit. "Because something's thrown us out of phase."
at August 02, 2013