5. The Wabbit and the Bat's Choice 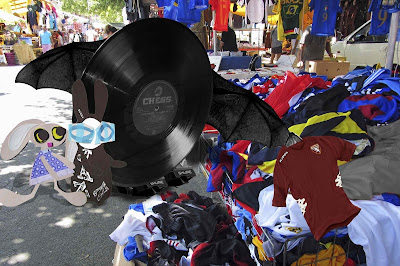 The Wabbit decided it was time to put colour to the test and persuaded Bat Diddley, the Vinyl Bat, to go with them to the market. "What lovely shirt colours!" said Diddley, "I must record them at once." The Wabbit shook his head. "You need to be in the moment, Diddley. What colour do you like?" "I like them all," said Diddley. "You have to choose," said Lapinette. Diddley rummaged on the stall without deciding. "I'll record the colours and choose later," he said. The Wabbit shook his head again. "You have to buy a shirt and keep it." "What about that red one?" said Diddley. "It's a little garish for your complexion," said the Wabbit and he steered Diddley across to a claret coloured shirt. Now Lapinette knew that was the colour of the Wabbit's favourite football team, but she decided to stay quiet. "That shirt has particularly excellent hue and tone," said the Wabbit in the manner of a disinterested expert. Lapinette smiled to herself. "Do you know, I think you're right," said Diddley, "it rather suits me." "Then what's it going to be?" asked Lapinette. "I'll take it!" cried Diddley. "This is only the start," grinned the Wabbit.
at August 26, 2013