3. The Wabbit and the Bat out of Hell 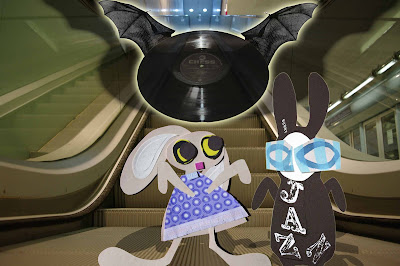 The Wabbit and Lovely Lapinette abandoned puzzling out the presence of vinyl bats and took the metro home. And as they hopped down the escalator, they talked about the bats and began to laugh as they batted the whole problem around. The Wabbit sang a few verses from Bat out of Hell but had to stop when Lapinette kicked him on the leg. "I'll be gone, gone, gone, ouch!" yelled the Wabbit. "You're bats in the belfry," giggled Lapinette. "I cant help it, it's my way," said the Wabbit and he held his paws up like wings. Lapinette held her paws up too and they hopped forward in unison. "Go, go, go with a smile!" sang the Wabbit and he hopped forward again. "Batdance! Do it! Keep bustin'!" chanted Lapinette and she hopped too. They hopped up and down and waved their wings and chortled. They were so enjoying themselves, they became quite oblivious to anything around. "I always ask that of all my prey," said a voice. The Wabbit and Lapinette stopped dead and looked at one another. "Did you sing that?" asked Lapinette. "Not guilty," said the Wabbit. He glanced over his shoulder and so did Lapinette. "Uh oh," they murmured.
at August 21, 2013