6. The Wabbit and the Cold Dark Matter 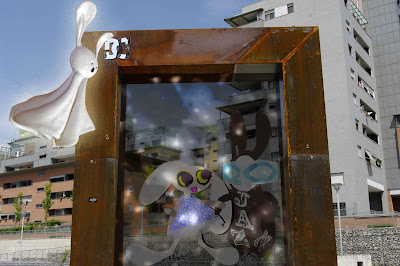 Ghost Bunny floated to a gateway and indicated that Lapinette and the Wabbit should get inside. Then she did something - and what that something was, no-one knew for sure. But a cloud of dancing matter swirled around the Wabbits and when they became visible, Ghost Bunny addressed them both directly. "What on earth are you two up to?" she breathed in a haunting voice. "We don't know," said the Wabbit. "It just happened," said Lapinette. "We're out of phase," said the Wabbit. "I know," said Ghost Bunny, "and that's exactly where you'll stay unless I can think of a solution." "I don't like it here," said the Wabbit. Ghost Bunny thought for a while and then she reached some kind of conclusion. "It must have been the dark energy creatures you fought in the Metro," she wailed. "They contaminated you." "Yuck," said Lapinette and she pawed her shoulders frantically. Ghost Bunny started to moan a low technical moan, full of equations and talk of isotropic inertness and perturbations. "That doesn't get us out," said the Wabbit. "We can't stay in this gateway forever, it's cold," sulked Lapinette. "I'm thinking," said Ghost Bunny. "so please let me complete my research." "What about a Potential Well?" interrupted Lapinette. "Oh, things aren't that bad," said Ghost Bunny.
at August 08, 2013