2. The Wabbit and the Vinyl Bats 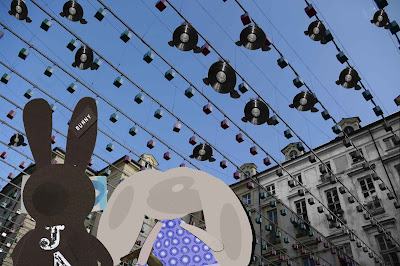 The Wabbit and Lovely Lapinette followed the bat and found themselves in a piazza just off Via San Francesco D'Assisi. "There are scores of them," said Lapinette, clutching her automatic. The Wabbit looked and thought hard. "There's something familiar about them," he replied and he pushed Lapinette's automatic away. "I don't think they're malicious." "But they seem to have taken the colour out of that building," said Lapinette. "It needed a clean," said the Wabbit. "No harm." They both looked up for a while, but nothing moved. "Are they asleep?" murmured Lapinette to herself. "You're the one with the bio acoustics certificate," said the Wabbit. "Do you want to give them a shout?" "In that position," stated Lapinette, "they can sleep and be ready to fly." "Then of course they do all that fluttering of wings and squealing," said the Wabbit.  Lapinette listened for a minute. "Can you hear that?" she asked. "I can," said the Wabbit and he angled his ears, swivelled them around and concentrated. "I can hear Jack Brenson and his Delta Cats," said the Wabbit. "That," scoffed Lapinette, "is Rocket 88 and it was really Ike Turner's band." The Wabbit stared at Lapinette. "You've been raiding my records!"
at August 19, 2013