7. The Wabbits in the Quantum Well 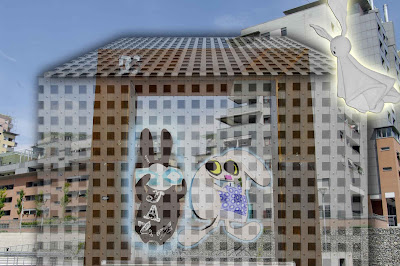 Ghost Bunny flew wailing into the air and back, as a cage formed around the Wabbit and Lapinette. The Wabbits flinched as a sudden, massive force pulled them forward, then back, then up, then down to the bottom of the cage. "I was in a washing machine once," panted the Wabbit. Lapinette squirmed. "How did that go?" she gasped. "It was all right until rinse and spin," spluttered the Wabbit. Suddenly the pulling stopped. "What’s happening, Ghost Bunny?" shouted the Wabbit. "You’re in a quantum lattice well," said Ghost Bunny. "It will pull you flat again and then you’ll be correctly in phase." "As much as we ever were," said Lapinette. "We were only going through a phase," mused the Wabbit. "I’ve been waiting to hear you say that for some time," sighed Lapinette and she kicked the Wabbit in the leg. "I didn’t feel that at all," grinned the Wabbit. "Then I have to make a few quantum adjustments," said Ghost Bunny and she flew around hauntingly for quite some time. At last she returned. "Here's a wish for the quantum well," she moaned. "How many dimensions would you like to be?" "Just the usual two," said the Wabbit.
at August 09, 2013