The Wabbit and the Jazz University 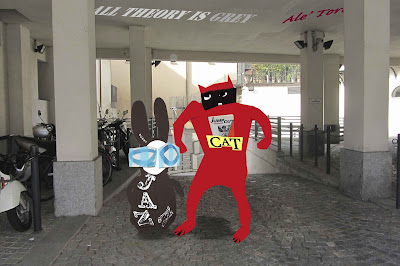 Skratch the Cat met the Wabbit emerging from the university and fell alongside. "Hello, Wabbit where were you?" "Oh, hello Skratch," said the Wabbit, "I was just giving a talk on jazz and rabbits." "Really," replied Skratch, "can you give a whole lecture on that?" The Wabbit looked snooty. "Jazz," he said, "is the natural music of rabbits," and he left it at that, as if the statement alone was enough. "How so?" asked Skratch, inclining his head. "Rabbits appear and disappear at will," stated the Wabbit. "Now you see them, now you don't?" queried Skratch. The Wabbit nodded gravely. "And so it is with jazz," he said. "In jazz, there are notes that aren't really there and we rabbits lean on spaces that aren't there." "How do you know they aren't there?" asked Skratch. "Because we can't hear them or see them," said the Wabbit. Skratch's brain whirled. "They're ghosts!" said the Wabbit. "They don't exist as such -  we just imply them." "Oh I see!" said Skratch, without conviction. "Well, talking of things that aren't there, isn't it colourless around here?" "Do you know all theory is grey?" said the Wabbit. "You hum it and I'll join in," said Skratch.
at August 14, 2013