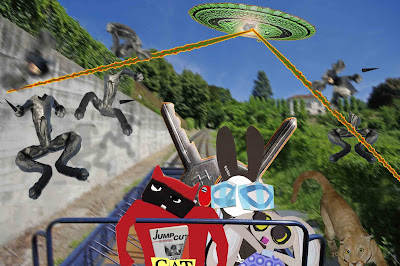 The train rattled down the hillside with the gang on board and Puma racing alongside. But the Agents quickly caught up and they shouted and waved their spikes menacingly. They drew alongside the train and were just about to board, when their ears pricked up. With agonised expressions, they flinched away from the wagon. "Do you hear something?" said Skratch. They all tried to make out the whining sound. It was high frequency and rather uncomfortable, but it infuriated the Agents who turned in pain and looked with horror at a strange craft rising from the horizon. "That’s definitely not one of ours," said Lapinette. "Brace yourself," said the Wabbit and they all clung on as the flying saucer fired volley after volley of ripple beams. The craft showed no mercy. Caught in the beams, the Agents blew apart and their limbs scattered over the track and across the hedges. "That’s takes care of our enemies," said the Wabbit, "but now we have to deal with our friends." "Ice Mice!" snapped Skratch. "I thought they were exiled in the Sombrero Galaxy? queried Lapinette.  "They’re here now," said the Wabbit. "What can they possibly want?" asked Puma. The Wabbit shrugged. "Well, what have we possibly got?"
at June 27, 2013