9. The Wabbit & the Rapper Maneuver 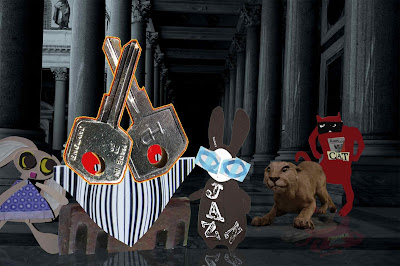 The Wabbit made a signal and everyone in the team moved around the Keeper, taking up position at the back. The Wabbit was about to use the Rapper's Manoeuvre - which sometimes worked. It was simple move in which he would engage in discussion with the Keeper. Whatever the Wabbit said, the rest of his team would vociferously agree with him. As they set up a jerky beat, the Wabbit drew close to the Keeper and rapped - "Who are these grim and scurvy knaves, who keep you cruelly enslaved?" "Enslave is grave! Enslave is grave!" chorused the team. "So hit them with an architrave," shouted Skratch. The Wabbit sighed deeply but the Keeper was hooked and said. "They are giant grey rabbits all, scraggy as the ghastliest troll". Suddenly all was clear to the Wabbit. "Sounds like the awful Agents of Rabit. We don't like their painful habits," he rapped. "They're both baneful and disdainful," yelled Puma. "Our association's been ungainful," shouted Lapinette. Then the Wabbit hunched in to the Keeper. "Let's find a way to work together." "With a cunning plan that's more than clever," sang Skratch. "Carried out with vim and vigour," chanted Puma. The Keeper looked astonished. "Everyone agrees!" he said. "That's the concept," smiled the Wabbit.
at June 22, 2013