7. The Wabbit and the Secret Room 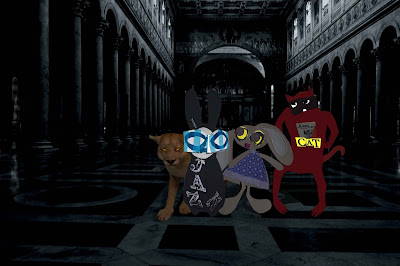 The Wabbit and Lapinette swept through the doors that opened before them - and Skratch and Puma jumped through behind them. Suddenly all was darkness and they stood motionless in the still air. Puma had the best eyes and so he was the first to see anything. "It's one big empty place," he murmured. Skratch blinked his way to vision, followed by Lovely Lapinette. Finally the Wabbit spoke. "It's one big empty place," he gasped. "And it has an echo," said Lapinette, digging the Wabbit in the ribs. "There's only the four of us here as far as I can see," said Puma quietly. "So why are we here?" wondered Lapinette. "And where's that key? asked the Wabbit. But of the giant key there was nothing to be seen and Puma glanced back and forward looking for it. "Skratch, you said there were three keys," he purred. "First I heard of it!" scoffed the Wabbit. Skratch assumed his lecturing position, "There were three doorways," he explained, "and that meant there had to be three keys." Lapinette' eyes gave a twitch of understanding and she nudged the Wabbit. "We were the other two keys," she said. "I'm not a key," said the Wabbit. Skratch was just going to joke about making a keynote speech when they heard a solemn voice echo from the walls. "So pleased you could all come." it said.
at June 19, 2013